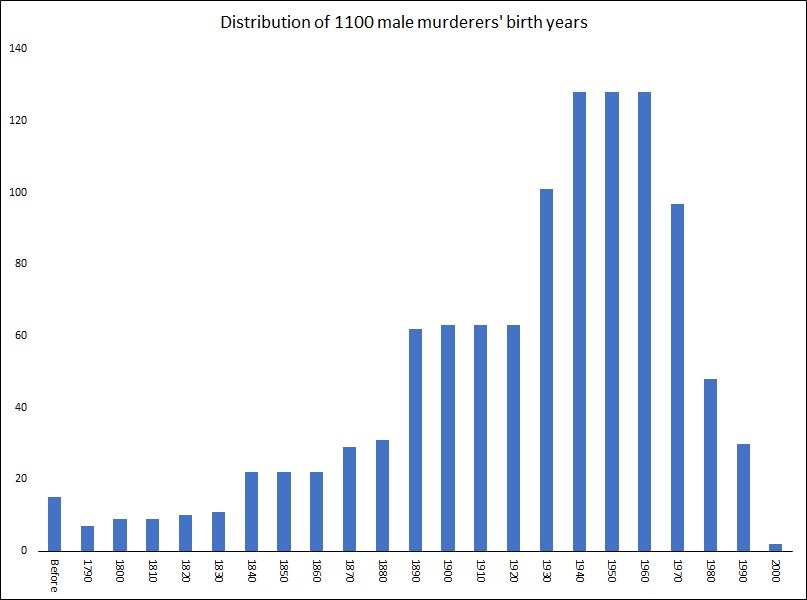 The astrological profile of murderers

A preliminary sun sign statistics for murderers is presented here.

The research methods I have used to research professions and longevity in astrological charts can also be used to analyze crime. Such an attempt has been done before by several astrologers more or less succesfully, and it will undoubtedly be done many more times in the future. The purpose of this research is partly curiosity, partly a wish to create a tool, which can identify the criminal mind, be it before or after the crime has been committed.

Before presenting the research results, I think it is appropriate to address some issues concerning crime in general and my research in particular: 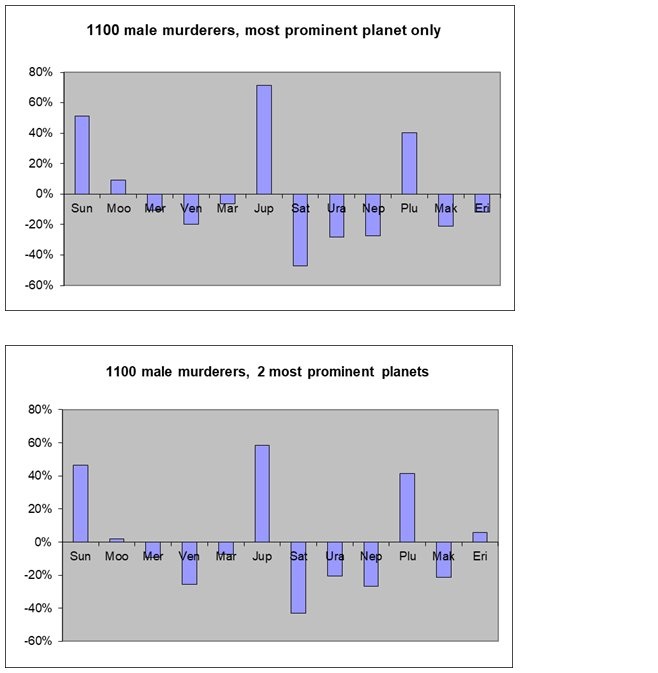 Figure 2 shows the distribution of male murderers among the 12 planetary vibrations. The bar diagram will be updated as more charts are rectified for this category. The results are highly significant. According to this Chi Square calculator, the p value (= probability) is below 0.0001.

Sun/Leo, Jupiter/Sagittarius and Pluto/Scorpio dominate by their presence, while Neptune/Pisces, Saturn/Capricorn and Uranus/Aquarius dominate by their absence. If we consult the astrological tradition, we end up with the following explanations:

As for the other 6 types you can find similar pecularities for each of them, although these observations should be viewed with great caution: 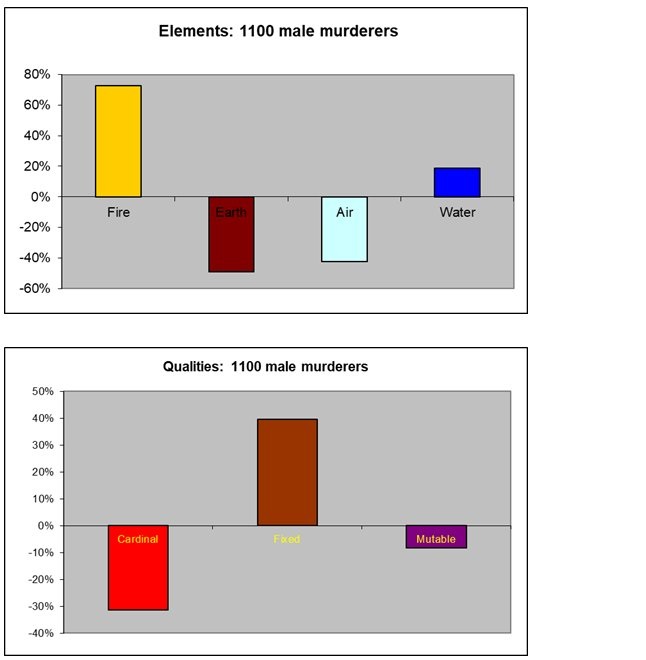 A catalogue of motives for murder

I have searched in the available litterature and on the Internet, and I am surprised that nobody else seems to have made the effort of categorizing the motives for crime in general and murder in particular. I believe that all murderers belong to one or more of the below categories, and I also believe that all people in a population hypothetically can be put into one or more of these categories, even though murderers represent only a small percentage of a population.

A. Greed and desire for money:

B. Sexual control or satisfaction:

C. Searching acknowledgment from superiors or others:

A case with twins

The twin brothers Carl and Kenneth Buntion were born in 1944. We don't know if they are identical twins. You can find their charts in AstroDataBank here:

Kenneth died young, when he was only 27 years old, shot by Houston police officers. Carl is still alive at the age of 72 years, serving a sentence for shooting a Houston police officer in 1990, motivated by hate to the police for the killing of his brother. Both twins have "lengthy criminal histories". When defending himself in court, Carl has said that he was abused by his father, and we may assume that the same was the case for his twin brother.

This twin case is interesting, because when I rectified the twins' charts, I ended up with the same Kündig cut, meaning that they have exactly the same astrological chart. But their fates are different. Even though they have many things in commen, one died young as a murder victim, the other one ended up in jail as a murderer with a considerably longer life.

This case puts astrology and research into astrology into perspective. The ancient astrologers said that the stars encourage you, but they do not force you to do anything. The content of the birth chart does not determine your fate in advance, you still have a free will, and/or factors outside the chart like the environment or even spiritual forces (like e.g. God, angels or karma) may play a role in your fate.

It's my personal hypothesis that the astrological factors displayed in a chart have a lot in common with DNA. Your DNA encourages you to follow specific patterns of behavior, and it makes you susceptible to particular diseases, but it does not determine your fate in each and every detail. Just like it is still rewarding to study DNA, even though DNA does not determine every event in your life, in the same way it is still interesting to gain knowledge about astrology, even though astrological factors do not determine everything in your life.

It's a curious thing how probing into one detail of astrology can change your entire view of how astrology works. Working with a mikro-cosmos seems to change my view of makro-cosmos!

So far the research into male murderers' chart is the biggest project I have undertaken so far. As I proceed rectifying more and more charts in an almost industrial assembly-line fashion I get a new sense of astrology.

Traditionally astrologers have expressed the opinion that your fate is determined by:

While scientists say that your fate is determined by:

What if both scientists and astrologers are right? Then your fate is determined by:

Traditional astrologers say that the inheritance is determined by the celestial influences - but two people with the same natal charts but different parents are not the same - their inherited genes play a huge role, which cannot be denied. For instance, according to astrology your appearance is determined by the celestial influences - but even if you are Kaukasian and have an astrological twin (i.e. a person with the same natal chart), who is Chinese, you will not look like a Chinese.

Let me phrase it in another way. Today we are 7.7 billion people on planet Earth. I refuse to believe that specific ethnic groups like Chinese people or African people have natal charts, which deviate from the Kaukasian charts. Ethnicity is a matter of genetics. In other words: It is impossible that a natal chart covers your enheritance 100%!

In the same way traditional astrologers would say that even the environment is determined by the celestial influences - I know for sure that it is true for famous astrologer Dane Rudhyar. My research into the charts of murderers, especially the mobster charts, suggests that this isn’t 100% true. The environment does play a huge role; if for instance Joe Gallo had not been born into a family, where the father was a bootleger, he wouldn’t necessarily have become a mobster later in lafe. (See also the national crime rates here). Nudging and grooming in the environment plays a huge role for crime.

In the same way scientists tend to ignore the free will - they prefer to present a human fate as a product of ineritance and environment, because including a free will would mean supporting the idea that something spiritual is at work - something, which expresses itself in moral and ethics. And traditionally scientists do not include anything spiritual at work - they prefer the Newtonian mechanics of cause and effect, something which is 100% materialistic.

And most scientists reject celestial influences entirely in spite of the growing amount of evidence in support of this ancient idea.